You are here: Home1 / UCLA biologist receives Society of Vertebrate Paleontology’s highest a... 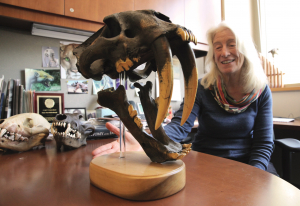 Jessica Theodor, president of the Society of Vertebrate Paleontology, says Van Valkenburgh is receiving this year’s Romer-Simpson Medal “because of her outstanding contributions to our understanding of the evolution and paleoecology of carnivorans, her pioneering work with new analytical methods, her contributions in mentoring numerous paleontologists and her role as one of a handful of women in a male-dominated field, showing the way to younger generations of women.”

“I am deeply honored to receive this award,” Van Valkenburgh says. “It is especially meaningful because the first of these awards was given in 1987 to UCLA’s own Everett C. Olson, then a professor in the Department of Biology, who became a friend and mentor, with whom I shared a lab for several years, after I first arrived on campus in 1986.”