You are here: Home1 / In Memoriam: Kathryn Anderson, Pioneer of Developmental Biology and UCLA... 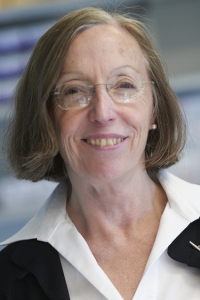 UCLA alumnae Kathryn Virginia Anderson, Ph.D., was a trailblazer in the field of developmental biology. Her research helped to elucidate the genetic processes that transforms a fertilized egg into an individual organism. Anderson came to UCLA’s Department of Molecular Cell and Developmental Biology (MCDB) in 1977, as the first graduate student to work with Professor Judith Lengyel.  Using new laboratory methods that she developed in the fruit fly model (Drosophila), Anderson genetically described the early steps of embryonic development. In one of her groundbreaking discoveries, she found that the earliest stages of an organism’s development relies on stored, messenger RNA of maternal origin. In 1980, Anderson received her Ph.D. from UCLA, then continued to make important contributions to developmental biology, including the discovery of genetic mechanisms that lay out the physical body plan, and genetic pathways that lead to different embryonic cell types. According to MCDB professor, John Merriam, “Kathryn had a history of firsts in her career which was recognized by her election to the National Academy. Her mentor Judith Lengyel was very pleased that Kathryn was the first graduate of our department to receive that honor.” In addition to being elected to the National Academy of Sciences, her other professional honors included receiving the Thomas Hunt Morgan Medal from the Genetics Society of America for her lifetime contributions to genetics and the Edwin Grant Conklin Medal from the Society for Developmental Biology.

Kathryn Anderson passed away on November 30, 2020. She was well-respected for her groundbreaking contributions to basic science, and greatly admired by her peers.  MCDB professor and Life Sciences Dean, Tracy Johnson, says, “We’ve lost a dear colleague and friend…an extraordinary scientist and mentor—an all-around wonderful person.”